If you have come to help me...

...you are wasting your time. But if you have come because your liberation is bound up with mine, then let us work together.
-Quote by Aboriginal Activists Group, Queensland, 1970s

K
I consider myself a student of life and a citizen of the world. Have lived in different countries and discovered that home is where the heart is and that my heart can be in many places at once. Am currently on a search for humanity and for the path that will lead me closer to people, animals, nature, and - ultimately - myself. 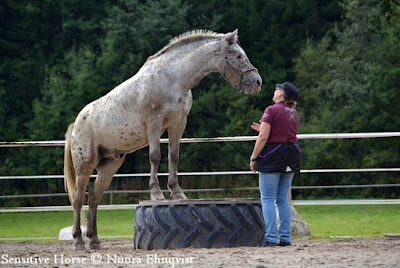 To truly know someone is to know the silence that stands for the thing they never speak of. ~Robert Brault

Each summer, when I travel to Finland to teach clinics, I meet a lot horses. Afterwards I may not remember all of their names, but I do remember each individual animal, as they all make a unique impression on me, sometimes more so than their humans. I know there are a lot of trainers who merely acknowledge the rider before a lesson (the rider is paying for the lesson, after all!), but I always make a point to greet the horse as well. It may only take a few seconds, but it can be a significant gesture. Even in that seemingly brief moment so much invisible information can pass between me and the animal. Each horse has their unique story and I want them to know that I am interested in that story. And not just the story, the horse itself. At minimum, I am there to connect and help.

This might sound a bit strange to someone, but the truth is that it is very important to me. In fact, sometimes I wish I could share the insights I get from the horses with the humans sitting a top. But often times they are not ready to hear half of it. Besides, they are there to learn how to sit on their horse. And I know that once they start to learn how to use their seats to communicate with their horses, they will also be better equipped to hear what their horses have to say. My job is to allow that to happen, not force the result by taking shortcuts.

This is why I was intrigued to observe Noora Ehnqvist during one of her clinics this summer. She does the same thing as I do, meets and greets the horse. But because her clinics are all about the horse-human connection on the ground (and on a soul level), she is able to share her insights with the human. In fact, that's the whole point. After she has met the horse, she can suggest the next step for the human to take, to start to connect on a deeper level with her horse.

I was very impressed with Noora's ability to "read" the horse. I call it reading, because that is what it feels like to me. Having studied and taught animal communication, I know that we all receive the information from the animals in different ways. I'm not sure Noora realizes herself how she reads the animal, she just does. Which is fine. There doesn't always have to be a need to analyze a technique or even admit that there is one. Animal communication is a very personal experience, often we are not conscious of how the information is passed, we are merely aware of the information.

All the horses in Noora's clinic were incredible, of course, but only one of them moved me to tears. At first glance, Anton seemed like an ordinary fellow; a 16 year old spotted gelding who had spent most of his life in one riding school or another teaching people how to ride. After his career as a lesson horse, he had made his way to his new owner, a gentle lady, who had brought him to Noora's clinic perhaps with the hopes of learning to understand him better.

I've seen many old lesson horses before and although this gelding was definitely a bit tired, he was by no means completely signed off to life. In fact, I felt like inside his stiff, worn body, there lived a dignified, humorous and above all, self-respecting horse. Noora must have seen this, too, as she immediately suggested teaching Anton a specific circus trick, namely stepping with his front feet on a raised platform to give him a sense of accomplishment and pride.

The owner started off with a very low platform. Using body cues and treats, she communicated to Anton what she wanted. Anton, however, didn't need much prompting. He stepped on the low, wooden platform in no time. After practicing with a lower platform, the pair moved to a slightly higher one. No problem. Anton was on top of the task, it was as if he had been waiting for this opportunity all his life. When the audience cheered his efforts, you could visibly see this magnificent horse come to life.

We all have the need to be seen and horses are no different. And when I say seen, I don't mean seen in the physical sense, but truly seen as who we are deep down inside, on a soul level. Have you seen the movie Avatar? If you have, you know that when the Na'vi people in the movie say "I see you", it means a lot more than seeing someone with your eyes. It is connecting to their soul, seeing their truth, seeing behind the mask. Sort of like the Sanskrit greeting Namaste, which often is interpreted as "the divine light in me sees the divine light in you". I see you, I truly see who you are and I respect that. I believe "seeing" or even the willingness to engage in an attempt to see, is the basis for all connection.

How many horses can ever truly feel seen by humans? We may often feel as if we know the horse, but I dare say we don't. So often it is the story we have made up about them, which we believe to be the truth. This applies to all horses, but especially the ones serving in a riding school.  To survive the life they are living, they often must hide who they truly are. And this was Anton's story as well. He was, undoubtedly, a great riding school horse. One look at him told me he was probably calm and steady - the trusted, unflappable mount for kids and adults alike. Never spooky, never resistant; the perfect guy, really. But that was just the outer layer of his persona, the one that mattered most to humans.

There are no accurate words in the English language to describe what it was like to see this horse come to his true self. Every time he stepped on the platforms in the arena and the audience cheered, he became prouder and prouder. And not only that, he felt seen. Finally, after all those years, people were acknowledging his true being. Outside he might have looked ordinary, but inside he was royalty, a king, even.

Finally, on the second day of the clinic, there was only one more platform left. It was very high. Even Noora hesitated.

"Perhaps another time", she suggested, knowing that normally it took days or weeks to get horses to learn to step on this tall platform. But Anton and his owner were already moving towards the massive object. And at that moment nobody had any more doubts.

When he stepped on the highest platform with his two front feet as if it was a podium built just for him, Anton truly arrived home. He was no longer a tired, old gelding, but a magnificent stallion who knew his wisdom and power. He stood with pride and looked around over the property as if he had just stepped on it for the first time. And perhaps he had.

His presence did not go unnoticed. Suddenly the three mares that had been peacefully grazing in the field next door, came cantering to the arena fence, followed by the herd's lead gelding. As we watched in awe, Anton stepped down from his podium and pranced over to the mares, his neck arched and his ears forward. He looked nothing like the sad horse that had entered the arena at the beginning of the clinic. This was the true Anton, noble and gallant. 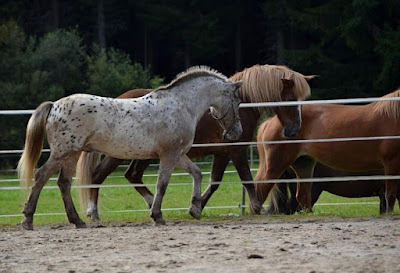 As I watched Anton interact with the mares and the other gelding, tears welled up in my eyes. I was, of course, deeply moved by Anton's incredible transformation, but I was also sad for all the other horses just like Anton, who never get to show the world who they truly are. How many horses share his story?

We all love our horses, but I dare say that often we don't stop to truly respect them as individuals. I sometimes hear people describe their horses in endearing, but slightly sarcastic tones. It's fun to tell stories of our butthead horse who did something hilarious (in our opinion). Heck, I've probably done it myself a million times. Sometimes, more often than not, these stories can have a belittling undertone or an unconscious superior edge even when they are meant to be told with love and affection. But if someone was telling similar silly or perhaps slightly degrading stories about us behind our backs, or worse, in our company, but ignoring our presence, we would be deeply hurt. Because these stories are not our truth.

I remember when I first met my own horse, Little Love. For the longest time I pinned her as hysterical, untrustworthy and perhaps a bit stupid. I thought she was frustrating, bad-mannered and ditsy. It took me years to see who she really was under all that fussing and stressing, and once I did, she was nothing like the horse I had met years before. Little Love was one of the most co-operative, sensible, peaceful and wise souls I have ever had the privilege to know. I could not have been more wrong about her in the beginning and my only regret is that it took me so long to truly "see" her. By then I also understood that all that other stuff, the hysteria and craziness, was just her way of shouting louder at us humans to finally get our attention. Because none of us were ever truly listening.

People say horses are our mirrors. And this is definitely true, to a certain extent. Often when horses are with us, their behavior is a direct response to our own behavior and attitude. But that is only half the truth. Horses may be our mirrors, but they are also unique individuals. And until we sense and understand the deepest truth of each individual horse, until we see her or him as who they really are, we cannot achieve true connection.